So, I've been trying to maintain progress on the layout (although I admit to neglecting some other web updates... but something has to give, right?).  The focus lately has been mostly rockwork, and trying to finish roughing in scenery and rockwork on the Rio Grande Southern's Enterprise branch, Hesperus and Wildcat Canyon, and Ophir.

In the process, I've been casting a LOT of rocks (using Durobond 45), and using a good deal of StructoLite plaster for basic scenic forms.  I thought you might be interested in a couple 'tools' for handling plaster.

First up is storage - I buy plaster from Menards (Durobond 45 in 25 lb bags, StructoLite in 50 lb bags) and then store it in these tightly-sealed buckets: 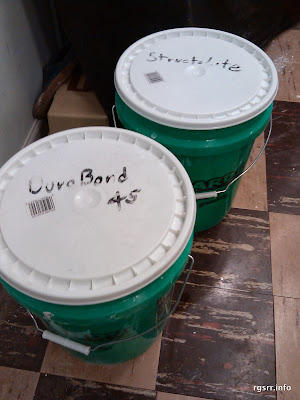 In mixing plaster, I'm using 1 quart paint bucket liners, part of a system for paint that Menards sells.  They're cheap, flexible, and reusable.  I rinse the liner between pours, and because I don't fancy the idea of plaster in our plumbing, came up this approach - a mining seive, some paper towls, and another 5 gal bucket.  This lets me rinse the used liner, then dump the plaster into the bucket.  The seive and paper towls catch most of the plaster, and the water is then clean enough to dump: 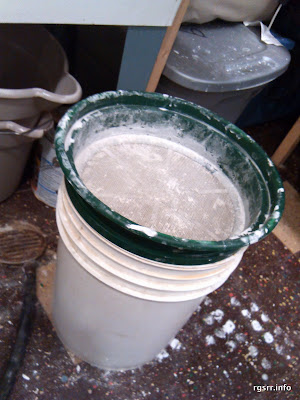 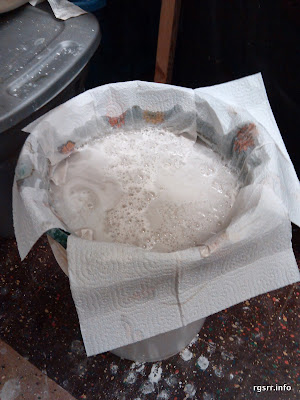 But let's move on to the layout, eh?  Here's a progress sequence of the Enterprise branch area.  As I've mentioned in previous posts, I'm really trying to create realistic landforms, but am also playing with sightlines, to hide portions of the track, and create interesting visuals.

So, let's go back to the really early work, and move forward... just for fun.  Here's the beginning - showing the (mostly hidden) turnback loop, and the risers for the actual branch trackage moving thru the middle. 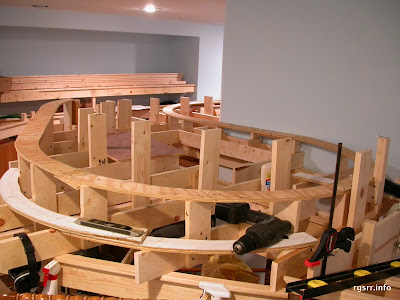 It's a little hard to believe - but this kid is now taller than I am!  But he was still little here.  We're looking down the branch from the Blackhawk mine location.  The switchback to the higher-elevation Enterprise mine is on the right: 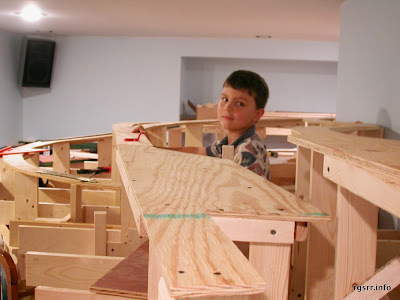 The PROPER use of the layout in those days: 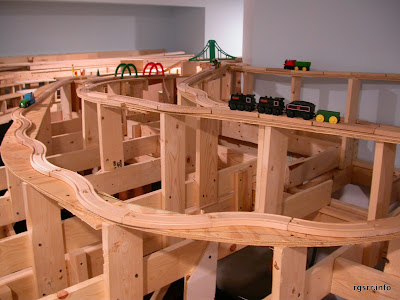 And here's the cardboard web and roughed-in landforms from a month or two ago: 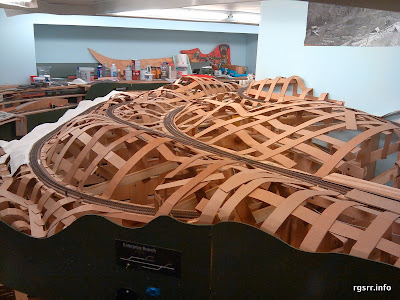 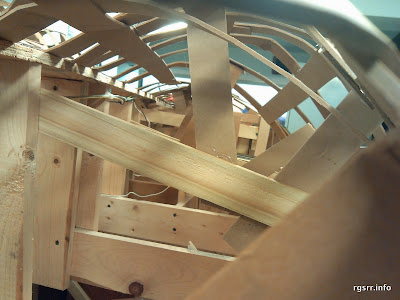 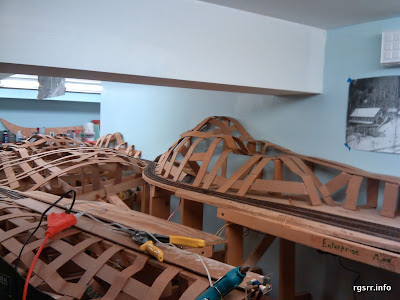 And finally to the state of the branch today.  As I said, this is a deep portion of the layout (because of that turnback loop), so I had to create some type of access.  As I did at Ophir, access here is via a mostly hidden opening.  By controlling the sightlines, this opening is nearly impossible to see from normal viewing angles, and that's w/o any trees or finished scenery to further mask it.  I much prefer something like this, rather then messing w/ a liftout hatch.

Hopefully it's also apparent that the branchline appears to weave thru a steep mountainside.  It's visible enough to make operating managable (a prime goal here), but also create the effect of the mountain being there first, and the railroad having to cut / blast / dig their way through the terrain. 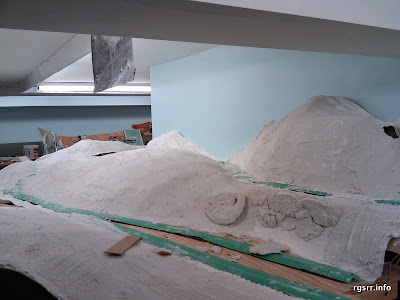 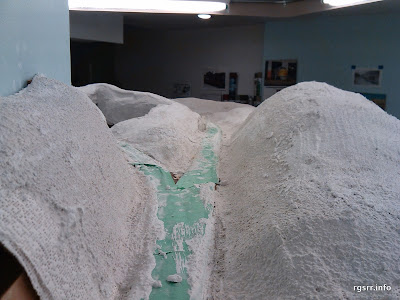 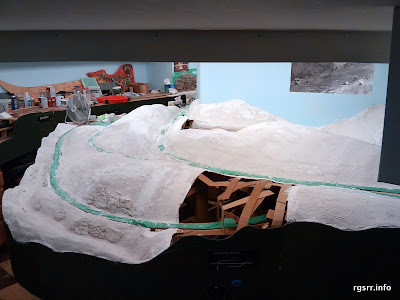 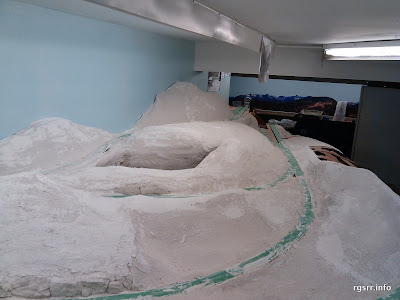 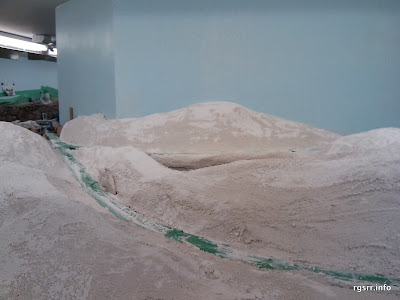 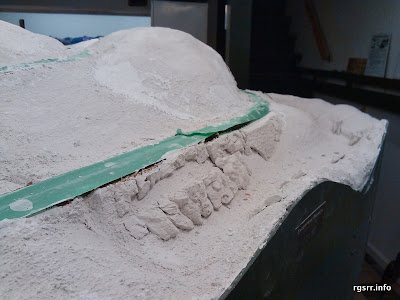 And finally, as I mentioned in an earlier post, I simply couldn't resist creating a view into the underground mining tunnels below Enterprise Mine itself.  Although the prototype entered the hillside horizontally (which I am modeling), I'm going to add a vertical mineshaft as well.  Here's the beginnings of that area - the below area (nice high fascia here to work with) and the mining area above (currently well defended by Lego guys - I mean, this is a GOLD mine, right?): 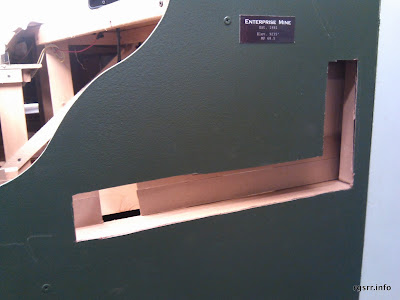 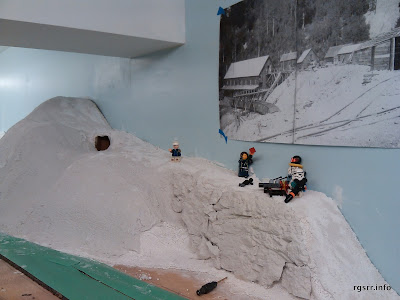 Then there's Hesperus... some of the many rocks are ending up here.  Yes, I know RGS fans, Hesperus-the-prototype was nothing like this, but operationally Hesperus fits here, w/ a single (abandoned) siding to the Porter Coal company holding the depot-become-coach that served there in later years.  But on my layout, there's the yard lead and entrance to staging at Durango above this area, and I had to scenically come up w/ something.  So - canyon scene!  And just beyond, the track twists thru Wildcat Canyon, which really was on the RGS a bit north of Durango.  A good deal of modeling license here, but it fits the overal scheme well enough for me. 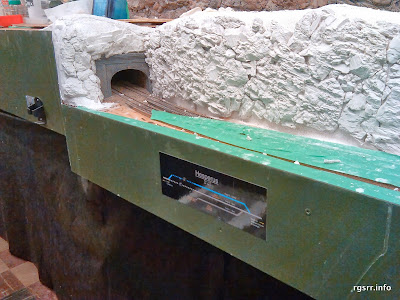 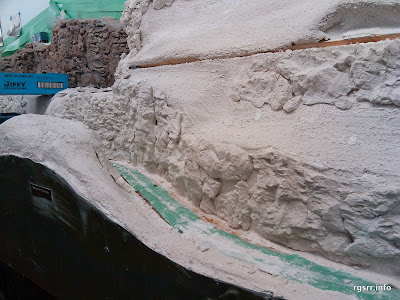 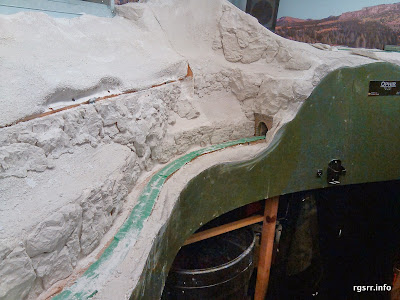 And I do need music or podcasts to help w/ the work... on this day it was Model Rail Radio, although I also listen to Model Railcast, and Scotty Mason, among others. 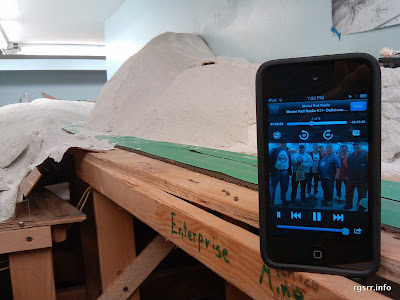 The rebuilding of RGS #20 continues - this time w/ extensive work on the trucks, frame, and firebox supports.

Some amazing photos - this is the most complete rebuild I've ever been aware of.
http://ngdiscussion.net/phorum/read.php?1,253051

It's not model railroad related, but this is pretty cool news - the Illinois Railroad Museum is hoping to install solar power, thus powering it's traction railroad w/ solar.  If this is completed, it'll have solar power plus operating steam (assuming 1630 is finally ready, which is the plan) next year, and a great showcase for both for school groups, etc.