More photos, and progress at Vance 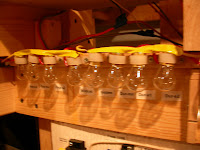 So, I thought I'd start with a few photos of my wiring panels. Here's a photo of the 1156 lamps above the Durango panel. For my wiring, I've been putting an automotive 1156 lamp on every block, and wiring the panels so the main feed (from the command-control system) goes to a terminal block, gets distributed to a bank of 1156 lamps, then (from each lamp) goes to the block feeder on the terminal block. 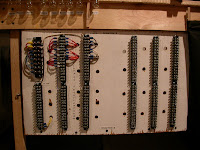 Here's a shot of the entire Durango panel. It's mostly empty, since all that's wired so far are the power busses and some of the blocks. Each area of the layout has its own panel, feeding blocks in that area. Each panel is feed from a 4-circuit power bus that runs around the layout. One of those circuits is the main feed from the command-control system, the others (yet to be used) are for 12v and maybe 5v power. 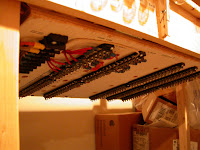 I use the area under the layout for household storage (and cave-exploration by my younger kids!). So, to keep that space accessible all of the panels are hinged, and fold up when I'm not working on them. Here's the Durango panel in its UP position. 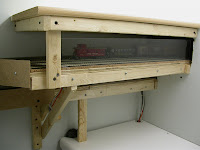 And the last show - here's the end of the Ridgway staging tracks, where they terminate in the laundry / furnace room. There's a laundry sorting table (and old counter top) along the wall, and both the lower main and upper main / staging tracks run right along the edge of this sorting table. Because it's often filled with clothes (we do have 3 kids!), I enclosed the tracks. There's plexiglass on the sides, and the top of the staging level is a lift-off piece of bookcase shelving. So - trains are protected, and the shelf is handy for more clothes sorting. Eventually I'll paint and finish this, but for now it's at least protected and the tracks are functional.

I had a good weekend, thanks to my wife who wouldn't let me work around the house and made me just relax. I finished cork roadbed for Vance Jct and the beginning of the wye into Telluride, extended cork roadbed about halfway to Ophir, and rebuilt a moveable section of layout where bridge 46-E will (hopefully) one day reside. This is a pull-out section I needed for access, and getting the drawer slides and alignment issues worked out was a highlight of the weekend's work.

I've finally completed (I think!) the work on the McPhee staging tracks. I've unpacked a couple of long-stored Bachmann 2-8-0s and I'm using those on the test train, forwards and backwards. They seem to handle the staging tracks and sharp entrance radius ok. And - it's really great to have steam running on the layout for the first time.

The test train is pretty long - 9 or 10 cars - with a variety of car types (72' Athearn heavyweight passenger cars, 40' and 50' frieght cars, etc). The grade to Lizard Head is 3%, and this train does need double-heading to make the hill. The grade coming into Rico from the north is also pretty steep (2.5%). Both need the pair of 2-8-0s on this train, but that's pretty much as intended; after all the real RGS needed to double-head as well with longer trains.

So - I've begun installing the base for Vance Jct (which sits above the McPhee staging). It's going well, but there are several transitions to other modules (my benchwork is built in sections that can be disassembled if we have to move). Getting exact height matches between these modules is always a bit of a problem, and the Vance module has three - the line to Butterfly trestle and the Ophir low line, and the two legs of the wye leading to Telluride. All three need work at the moment, so that's the next focus.

I was working on the turnouts to the McPhee staging area, and finally did get them completed, but with a really sharp turn into the staging. It won't be visible, but I'm kinda bummed it ended up that tight.

But - with that done I realized I had to finish wiring and testing the staging track before starting any work on Vance Jct (which will be above it). So - a bunch of work yesterday on wiring this area. At least the wiring is getting done!

With the yard throat completed at Ridgway, I've moved over to Dolores, and worked on the staging tracks (McPhee) this weekend. These depart the mainline at the south end of Dolores, and duck into what will be a tunnel under the Vance Jct / Lizard Head area. I've had the staging track laid for some time, but it was connected to the main.

So - I spent a good deal of my day off on Monday laying more turnouts and tying those tracks into the main. It ended up being rather frustrating and messy, as the turn into the staging tracks is sharper than probably anything else on the layout, and I really wanted to avoid that. Yes, it'll be hidden mostly, but I like to maintain the 30" minimum radius, and I'm sure I'm under that here. Oh well - there's just not enough room there to fit everything in. If it's really bad, I suppose I could replace one of the turnouts with a sharper turnout, or even a curved turnout. I'll try some test trains on it later and see.

Once this is done and reliable, I can continue working on the mainline into Vance Jct, which will involve covering this staging track.

New throat at Ridgway! And a real blog at last

A little more work on Ridgway... I installed most of the yard throat this weekend, and finished the crossover in the closet. These turnouts aren't too bad to reach manually, but installing turnout machines (if I go that route) will be difficult, as access in this area from below is, er, problematic shall we say.

So... I've been thinking about how I format the construction journal, and have decided that a real blog might be easier, and more fun, especially if folks want to comment on the layout. Also, I want to publish pictures more easily, so hopefully this will help there as well.

Oh yeah - I got the 1156 bulbs that were giving me trouble replaced, and everything's fine now. I think the order I received actually had some bulbs that were similar, but not exactly, 1156s. Oh well - one more 'lesson' learned. And more soldering practice, which can't ever hurt (well, unless one drops hot solder on one's self, but let's not talk about that. Actually, I avoided that this time).