Shoot... has it really been three months since I posted here?

I (mostly) finished the 4 diesels I've been remotoring... decals are done, headlights are done, decoders are installed, and they are reassembled and operating. There's a few final delicate details (air brake hoses, cut levels, etc) that aren't added yet, and weathering isn't done, but other than that they're ready for the layout.

The layout, on the other hand, is back in the land of carpentry, as I've been adding fascia boards to most of the layout. I'm using untempered 1/8" masonite, and so far I've got about half of the layout done. There's a few sections that will have to wait, since wiring in the area isn't done yet (mostly around towns), but other areas are coming along.

Here's Ridgway - this is one of the areas where I've hinged the fascia, to allow access to the hidden track behind, and to make it easier to install controls into the fascia later: 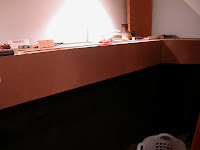 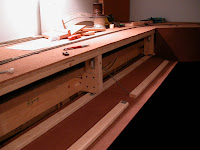 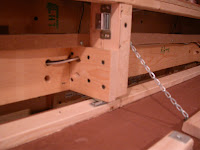 And here's the area near the Enterprise branch: 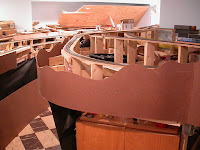 And finally, a shot of the area near Ophir's bridge 45-A (to the right of this photo), showing the prep work for another piece being added. I'm using 1x2s on edge where I can, as something to either screw or glue the fascia to: 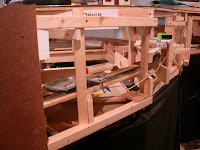