Well - lots of progress on the canyon.  These next few shots show the completed cardboard web.  Although that ridge looks really narrow, sightlines will keep that nearly hidden when finished (I hope). 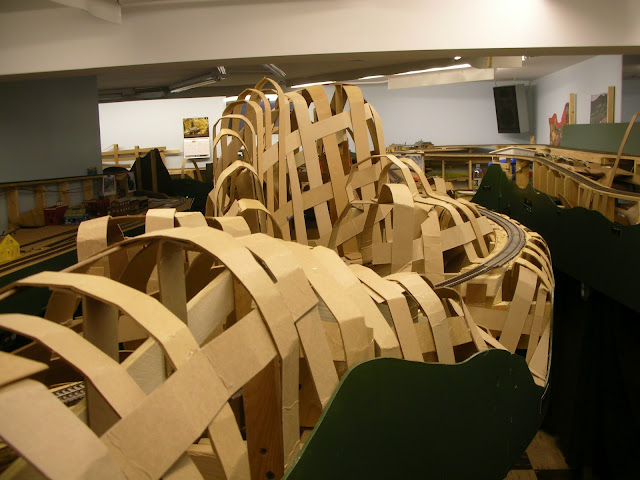 This is the area leading into the cut, with trestle 42-A just before the cut.  The shot afterwards shows the cut from the other side. 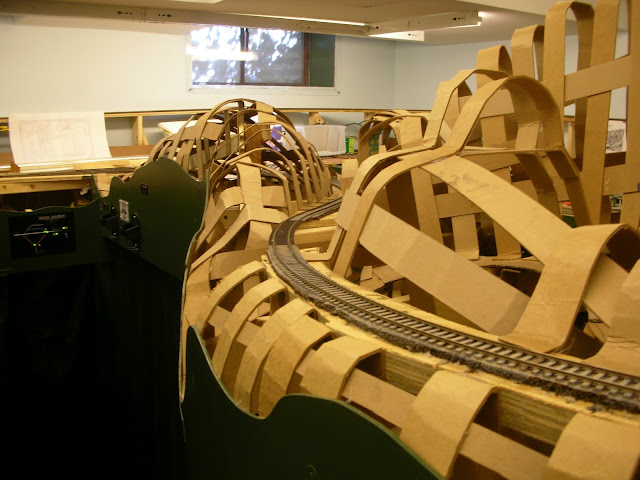 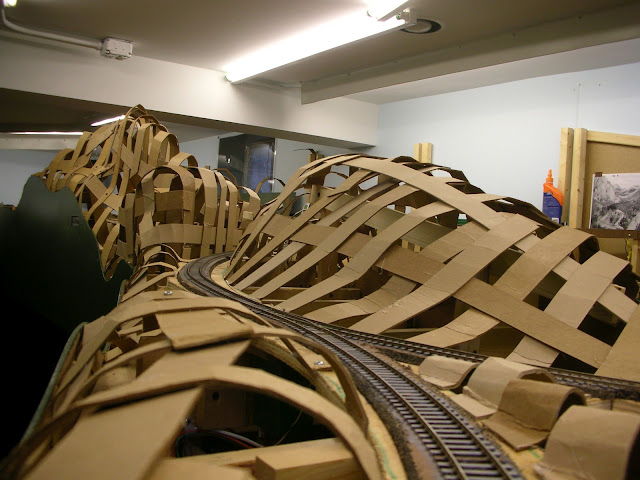 And with basic plaster cloth completed - here's how it looks right now.  Next step - rocks!

This is looking across bridge 42-A, into the river canyon.  The section in front I left incomplete, because the canyon is so steep & narrow, I'll need to install and paint the rockwork on the far wall, before building the near-side wall. 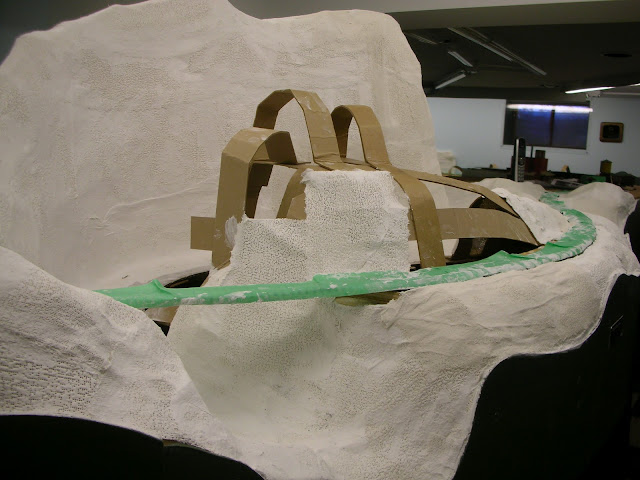 Another view looking across bridge 42-A and into the cut. 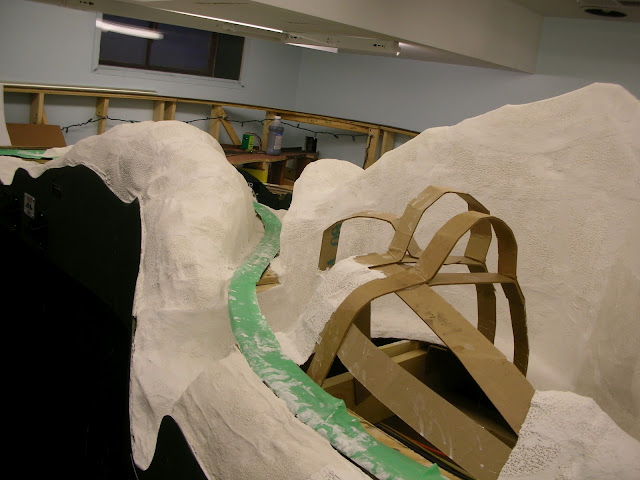 A less interesting shot, I suppose, but this the trackwork leaving Telluride, and running alongside the river, before diving into the canyon proper.  And you can see, the goal of blocking the full view of this little branch is working, and the trackwork here seems far longer than the few feet it really is. 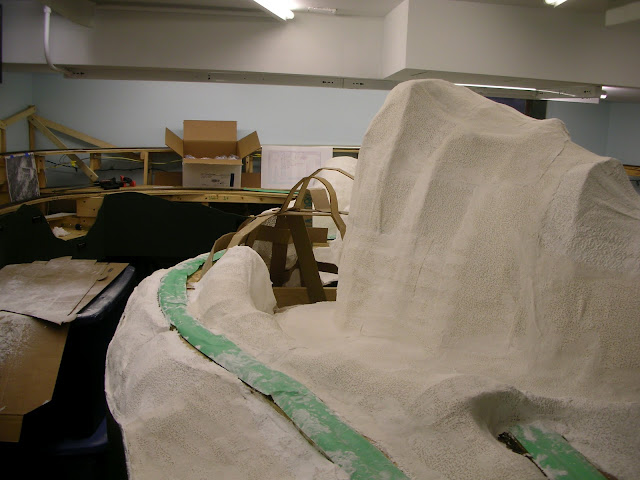 And here's the cut from the far side.  The cardboard web shows badly in parts here - but that'll be addressed and hidden later w/ plaster and rockwork.  Another goal here was keeping the area on the left side - which is really the aisle serving Dolores (off to the left) - interesting as well.  Although the view from this side blocks the entire river canyon, I didn't want a simple wall or hillside - nature is rarely like that, I feel, so I made this an area of little sub-canyons.  Should be fun to fill in w/ more rockwork, trees, etc. 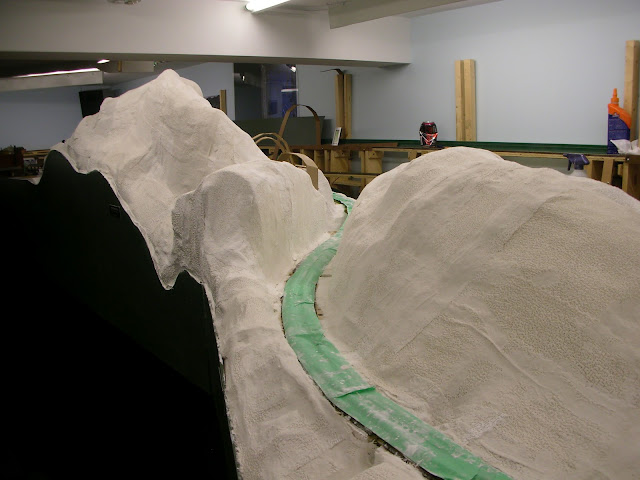 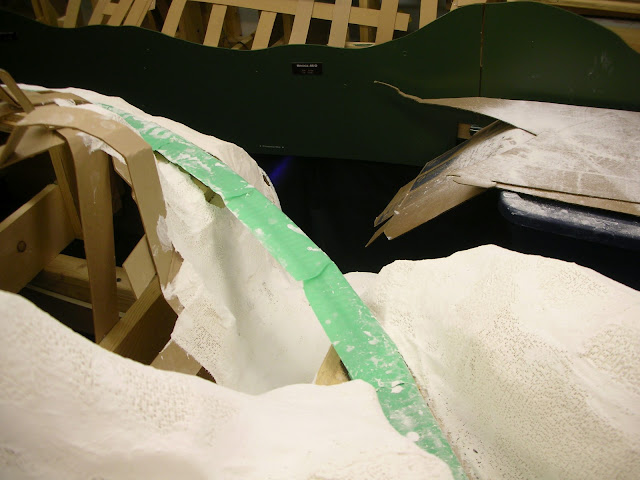 Here's a view holding the camera high, and looking over the ridge, down into the bridge 42-A area

No pictures this time... but I'm continuing with the cardboard web in the Keystone Hill canyon area.  It's surprising to me how much is actually needed, to get the shapes just right.

I should mention that my benchwork is built in sections of 8' long or so, and then bolted together.  I'm avoiding any structural components from crossing those gaps - thus fascia, roadbed, and now cardboard all have defined edges and support at these section gaps.  Roadbed & rail does cross these gaps, and plaster will as well - but my thinking is that I ever have to move this, I can cut those without having to break the main structural parts.

Anyway... this has been a fun study in prototype modeling - the prototype here being the landforms themselves.  I've not studied cuts and cliffs in such detail before, and the more I study the photos of the RGS in books, the more I have to come back to the canyon and make it more extreme than I'd dared before - higher cliffs, steeper cuts (nearly vertical), etc. 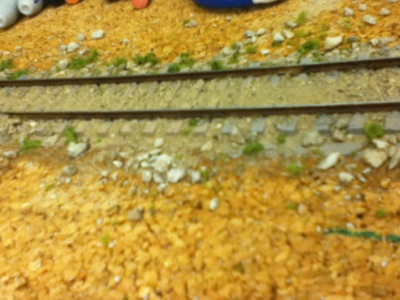 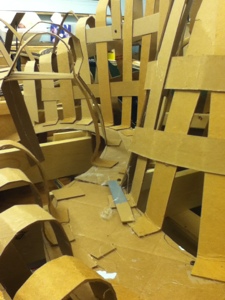