So, summer is ending, and with my time for spray painting (since I need to do that outside).  Thus, I dug out my dozen accumulated kits of Life-Like Proto2k Stock Car kits.  Which I've been putting off for some time, since they've got lots o tiny details to work with.

Anyway, I finally tackled the whole bunch, and have been working thru adding grab irons and other extremely tiny plastic details.  Here's some photos of that work: 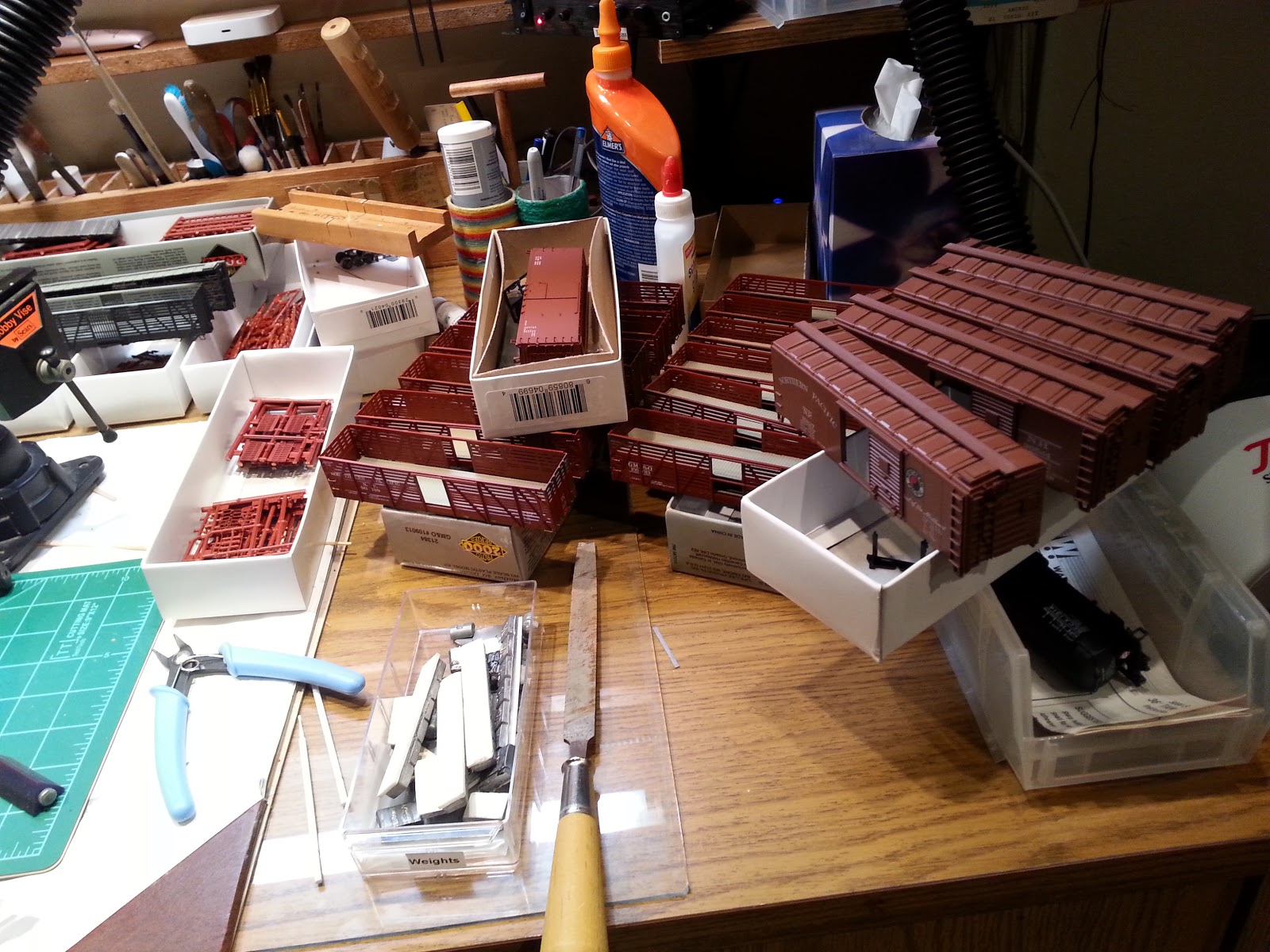 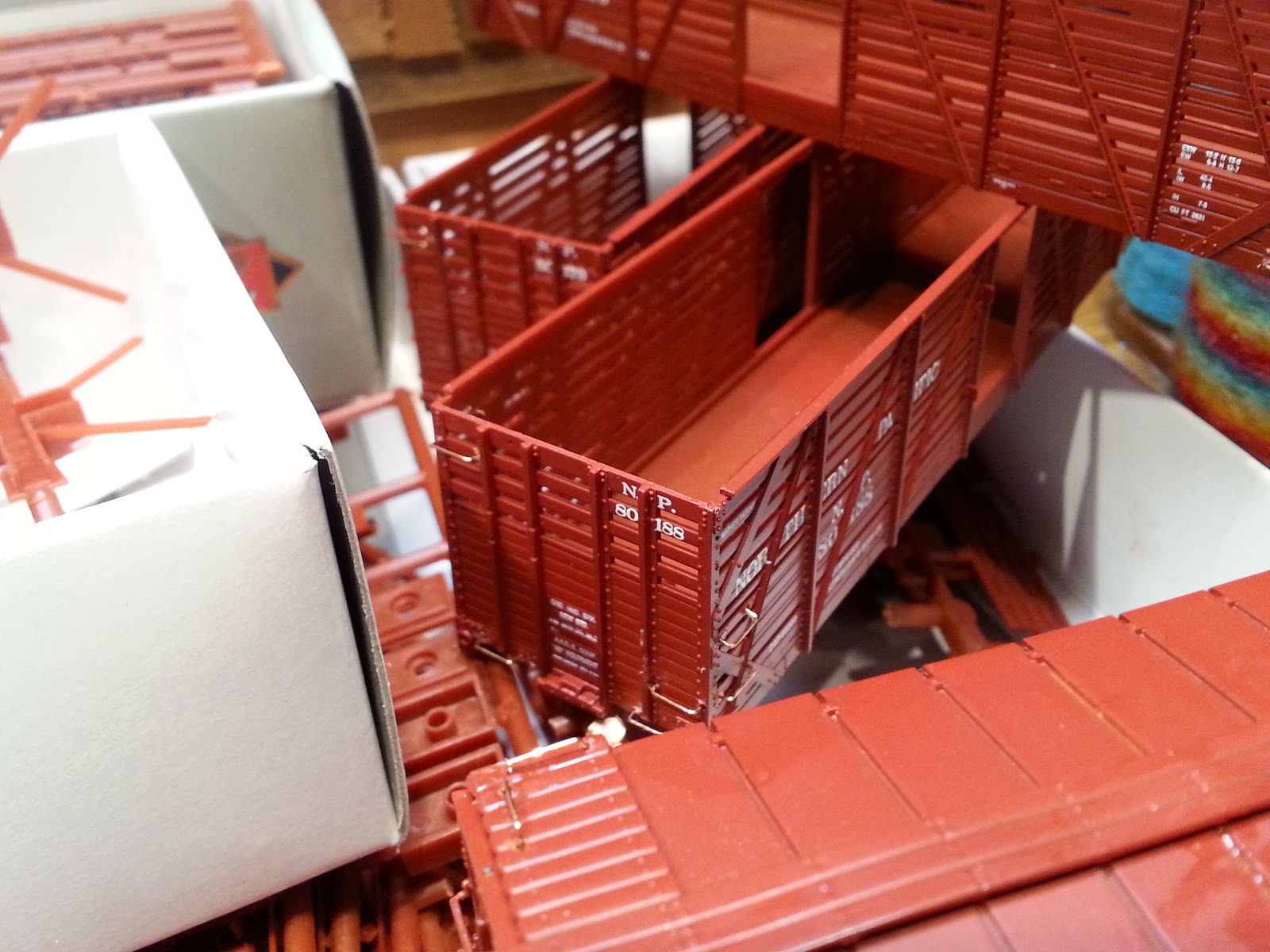 These build up into nice models of Mather cars, but they aren't really appropriate for the RGS.  Or, in my case, even my alternate-history RGS.  What I'd like to do is create something that looks more like the RGS equipment (even though it won't be narrow gauge, or right in lots of other ways).

What I want here, I guess, is a caricature - something that feels like the prototype, w/o trying to copy it exactly.  So here's what the RGS cars looked like: 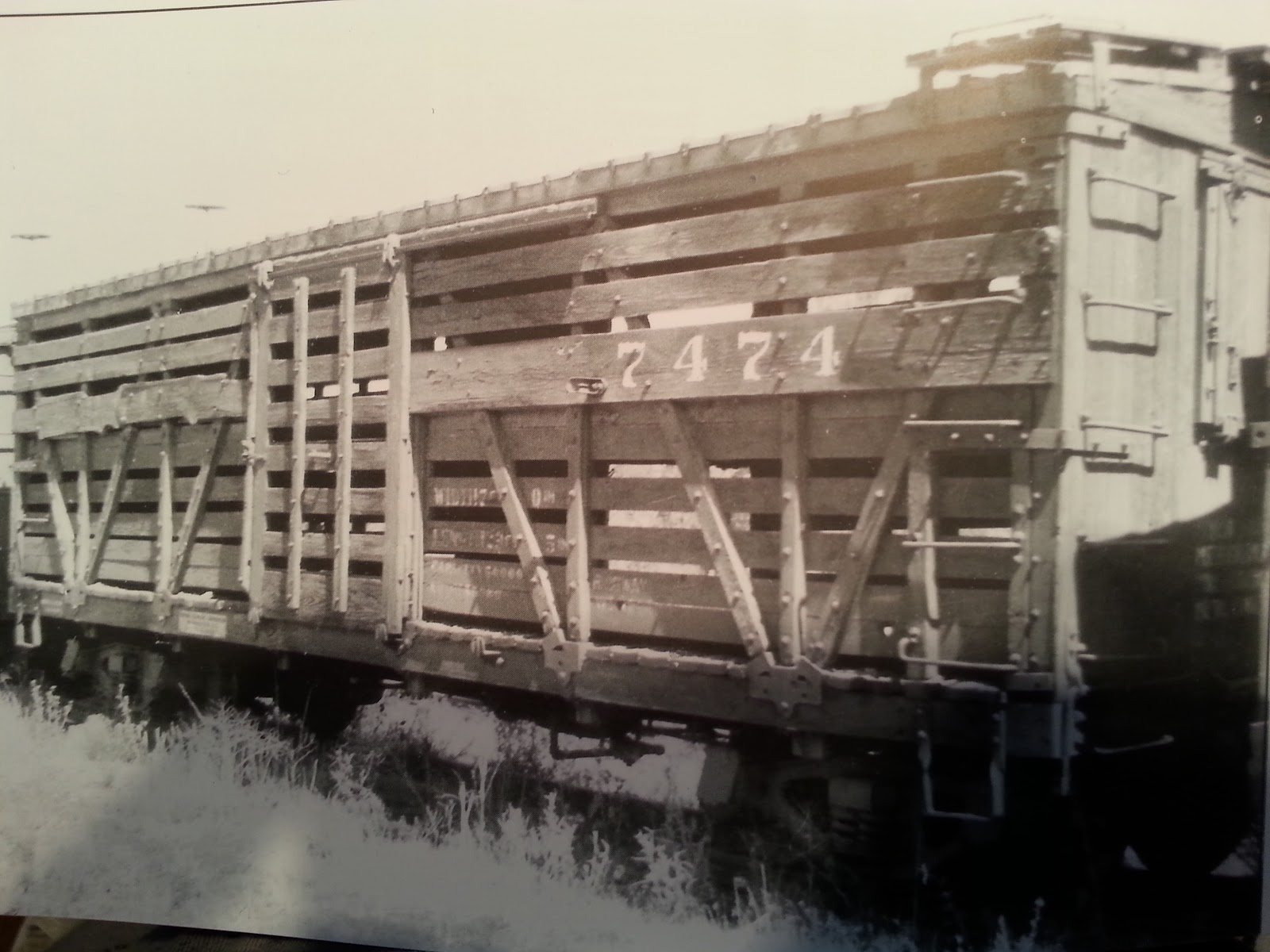 What stands out to me is the boards on the outside of the bracing, and that most of the letter is on these outer boards. 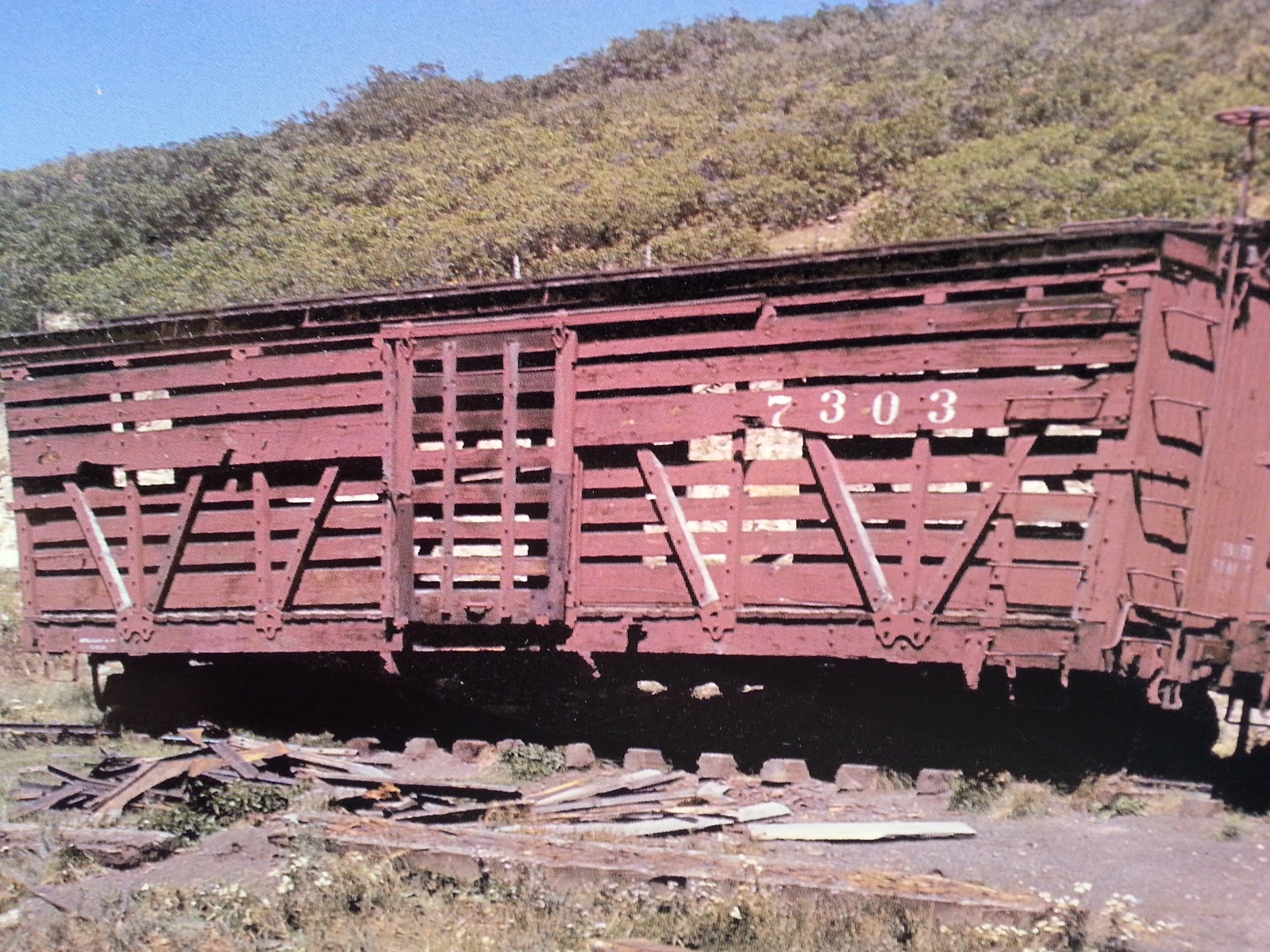 In fact, with these old RGS cars, in some cases that's MOST of the lettering.  Details about weight, bearing repacking, etc is so faded its nearly invisible.
D&RGW stock cars were similar, although the pattern of the outer boards is different, and the lettering and detail specs etc are far better maintained: 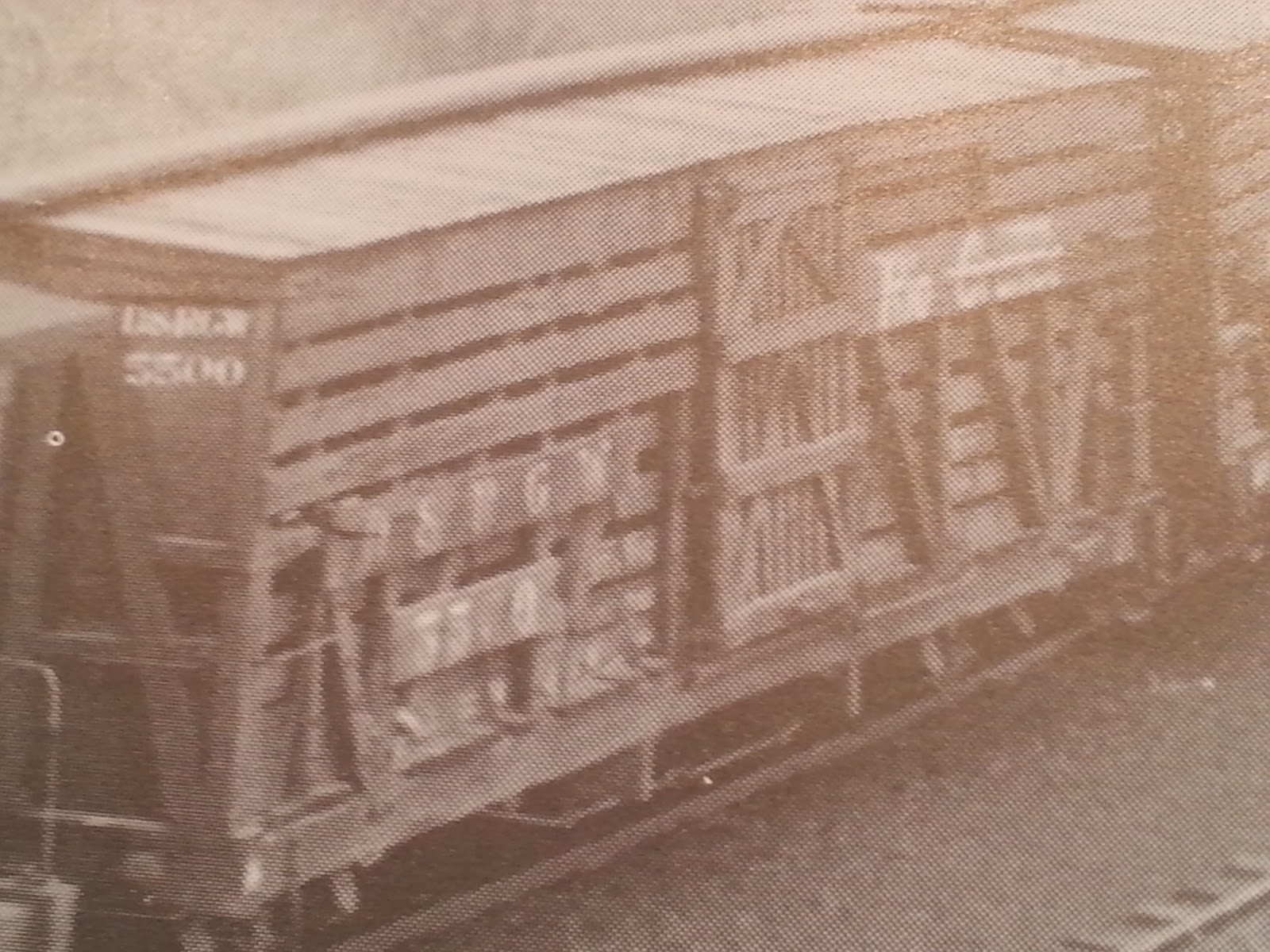 OK, so here's what the kit looks like (for now): 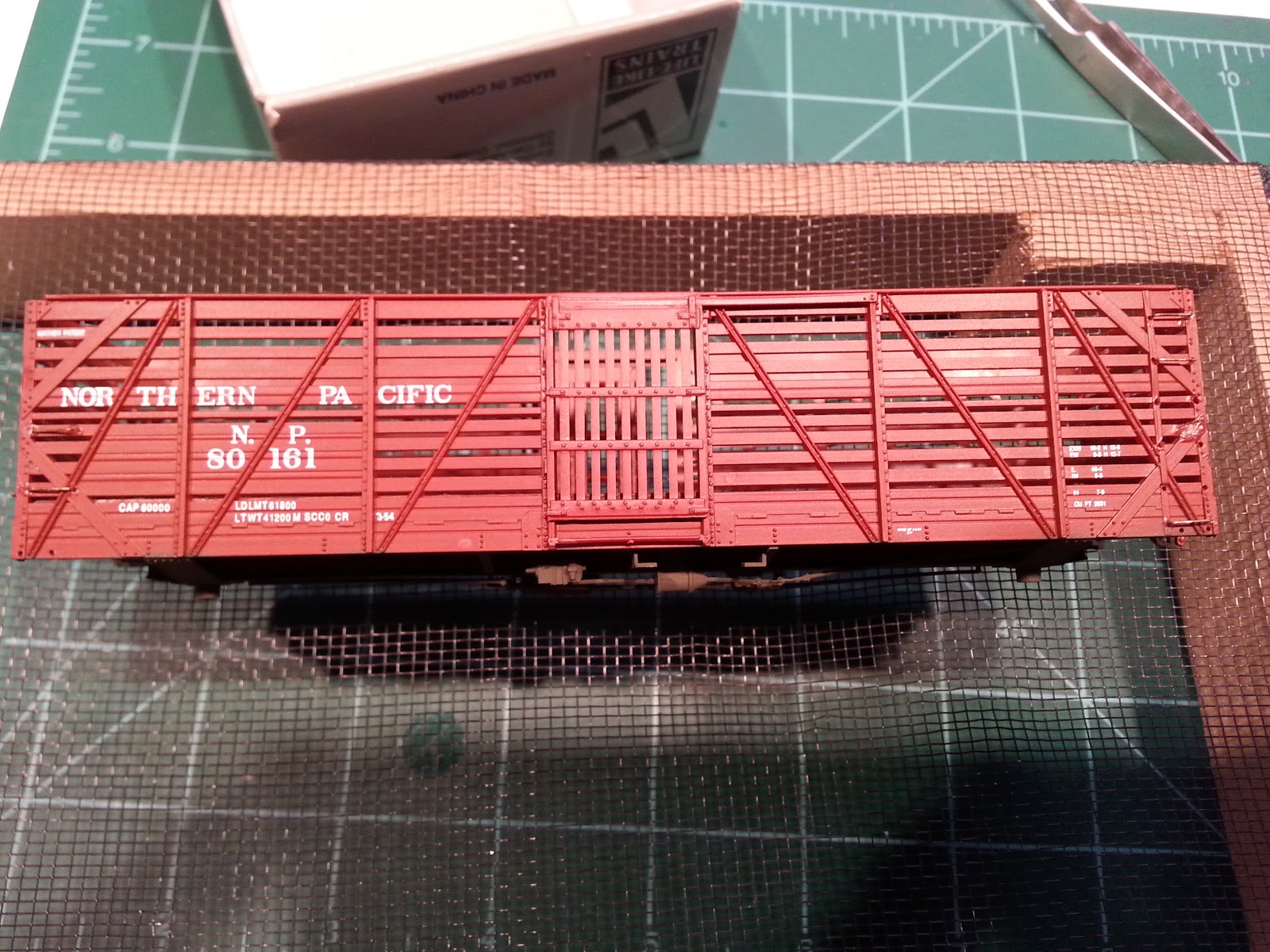 My thought was to add the outer boards, repaint and then re-letter.  I'll probably build a number of RGS as well as D&RGW versions.  Not sure when I'll finish, but I'll post here when they're further along.

And, if you'd like more details on the rail Rio Grande Southern stock cars, there's details and photos on my Rolling Stock page here:
http://rgsrr.home.comcast.net/~rgsrr/rgs/stock.html#stock

Podcasts... such great stuff out there

Do you listen to any of the great Model Railroading podcasts available?  These are like radio shows you can download onto your phone, iPod, or computer, and listen at your leisure.

They are amazing because there's so many topics discussed - at length - and a lot of interesting people in the hobby get to chat and share their views.  Or, you can call/write in, and participate in the podcasts yourself.

These and other model train / prototype railroad news sources are listed on my links page, at:
http://rgsrr.home.comcast.net/~rgsrr/rgs/rgs_links.html


And I should note that there's LOTS of other podcasts out there.  Some other topics I listen to include marriage stuff, project management, and even sermons from our own church (we can catch up on a sermons series if we're out-of-town sometimes).