There is a serious effort to rebuild a portion of the narrow-gauge Silverton Northern, running north out of Silverton Colorado to Howards Fork.  They're looking to raise $10,000, and have about $3800 raised so far.

More details are in this article:
http://www.silvertonstandard.com/news.php?id=660

If you'd like to help, there's a crowd-sourcing project where you can donated located here:
https://mainstreetcrowd.com/SJCHS

Here's a little history on the line, from the above article:

The original Silverton Northern was built by Otto Mears, operating from 1895 to 1942, serving the mines between Silverton and Animas Forks.
It began at Silverton with two miles of Silverton Railroad track, and reached Eureka in 1896. It was extended up a 7 percent grade to Animas Forks in 1904 for a total of 12.5 miles.
The branch up Cunningham Gulch was built in 1905. A few trains ran occasionally on the Animas Forks section into the 1920s and regularly on the lower section to Eureka until 1939, when the Sunnyside Mine closed. The SN ceased in 1942 when the U.S. Army drafted three SN locomotives to serve its needs in World War II on the White Pine & Yukon in Alaska.
The San Juan County Historical Society announced its ambitious plan to rebuild the 2-1/2-mile section of the old Silverton Northern Railroad from the Powerhouse Industrial Park to Howardsville in August 2010.
Historical society officials said the idea underlying the rebuilding effort is economic development — to develop a locally operated passenger-excursion train based in Silverton.

As I think I mentioned before, I'm using drywall shims purchased from Menard's for my cardboard strips.  A box of 5 of these bundles costs about $32 - fast, pretty cheap, and far easier than collecting and cutting up old boxes. 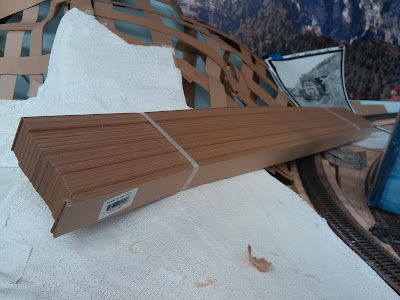 After lots of hot glue, photo references of the prototype, and head-scratching, here's what the area looked like before the plaster cloth went on.  It's a complex area - in that first shot you can see the 3-track staging yard under the Elmer's glue - it'll remain accessible from the access hole (which is framed out here).  That track is at about 52" high.  Below that, at 47", is a return loop running under all of this.

Then there's the creek, coming into the scene near the speaker (yes, I know, perhaps I'll move it much later when this scene nears completion).  I had to figure something interesting to do w/ it, while evoking the prototype's sense.  Using the actual creek's route, I copied that and also managed to route the creek around the access hole, twisting and dropping below the town and eventually under the big 45-A trestle. 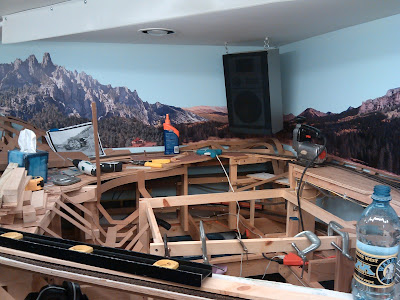 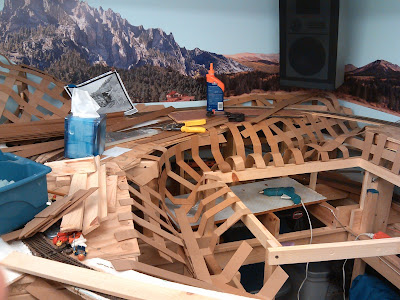 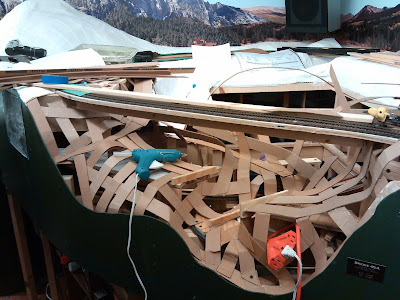 And here's a number of shots of the scene after the plaster - where you can see the landforms emerging from all that cardboard.  I'm playing with a number of variables here - blocking nearly all views of the access hole from normal viewing angles, adapting the prototype's landforms to my space, and giving the eye lots of interesting nooks and crannies to follow.  The creek will - I hope - really draw the eye into the scene.   And the fact that parts of that creek will be hard to see to only add to the visual interest.

These first couple of shots are from really high viewing angles - which you can't see in real life without a ladder.  But they show how the creek, access hole, and everything else fits together. 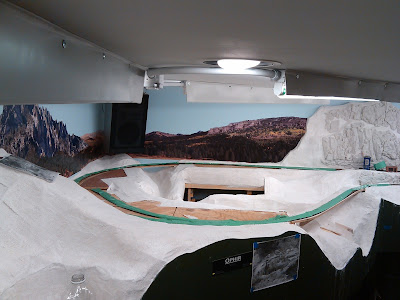 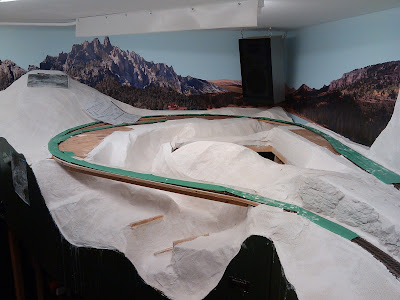 Here is a view from slightly below normal viewing angles.  The hill behind this bridge is higher than on the prototype, but it's hiding the access whole.  And I think it'll work pretty well - evoking the very rugged terrain as you move away from the town of Ophir slightly and down under this bridge.

The bridge, btw, is about 65% of the prototype's size.  The creek twists down and exits between the two right-most foundations.  These are the three heavy footings for the lower bents of 45-A - they support their own set of heavy stringers over the creek - then the actual trestle bents for the bridge above were built on those stringers. 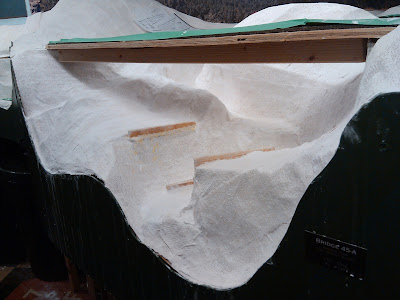 And another fairly high-angle view, showing the creek meandering below the town.  There's also a dirt road coming up the left side of the creek, crossing narrowly thru a couple of bents of bridge 45-A.  There's timber retaining walls supporting this road above the creek. 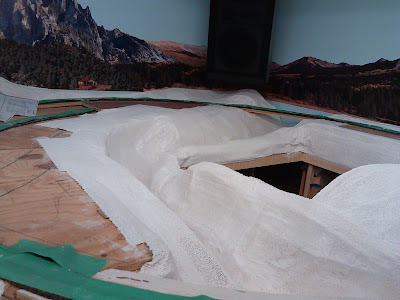 If you'd like to see photos of the prototype town and bridges, I have an extensive set of details & links on my Route Summary page - just scroll down to milepost 45 or so.

Starting another mountain area... this is a steep switchback (the old Enterprise branch).  The main line here is curving below, and eventually entering a hidden area.  Above, the switchback leaves Rico and leads first to the Blackhawk mine, then continues climbing & reversing to reach the Enterprise mine.

Yeah yeah... I know... this branch was long gone by the time period I'm modeling, but switchbacks are really cool, both visually and for operations, and provides a great operational focus out of Rico that doesn't interfere w/ the main line.

There's an access hold in the middle of this (since that's a 30" radius curve on the main, making this scene almost 6' deep).  I plan to create the scenery to both break up the switchback visually, and hide the access hold from normal viewing angles.

There's a river running to the left of the mainline, which is already partially covered in plaster cloth (hard to see in these shots).  First step for the rest is some lumber framing to support the cardboard web.

These photos show where I'm starting from. 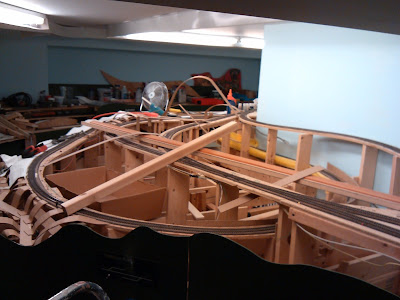 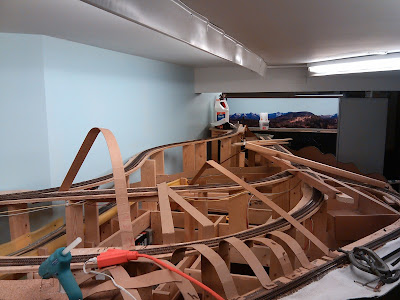