Forcing others to see red

So, I continued working on wiring between trips to local pool this weekend. The RGS was not signaled, of course, but my layout has a number of hidden track segments and I've added detection for those sections.

There's a couple of long hidden segments that exit directly into towns (Dolores, Ridgway, and Vance Jct). In those areas, if you are switching and blocking the main, I think it'd be helpful - and probably required for sanity's sake - to be able to block trains from unexpectedly jumping out of those hidden tracks. So - I'm adding signals (on the panels at least) for those blocks, and allowing the operator in - say - Dolores to force the signal red to prevent trains from entering blocks leading to Dolores.

So - I've got blue LEDs on the track segments, to show if a train is actually in those hidden blocks, and red/green signal LEDs (on the panels) to indicate the signal status at each end of the block - repeated on panels at both ends of the blocks. When the track is empty, the signals are green, when occupied they are red.

What I've added is a 'force red' switch in Dolores, so that if you are switching in Dolores and want to stop trains from entering, you can set the block signal at the far end to red, even though the block occupancy LED (blue) will still show the track as empty.

The wiring for this proved a little trickier than I expected, and it's not done so I'm not completely sure it'll work. In terms of physical wiring, I'm bringing all the panel LEDs from both locations to one panel (Dolores in this first case), then bringing the detectors ouputs there as well, and making all the logic connections in one place. I'll spare you further details, but it's been a fun exercise so far!

And fascia photos, plus a little wiring

And, at long last, here's some photos of the painted fascia. The layout still in major construction stage, so it's messy! The paint was done using Behr paints, primed with a tinted good-quality primer, and then 2-3 coats of semi-gloss interior latex, in Windsor Moor, which is a dark green. I picked it because it's dark enough to not call attention to itself, but isn't black, and seems to blend well w/ planned scenery colors. Behr is available from Home Depot.

I was pretty pleased w/ the results. I picked the semi-gloss because I wanted something tough, that wouldn't easily scratch, scuff, or get marked up.

I plan to add car-card holders, in the same color, but that's on hold until wiring is further along. 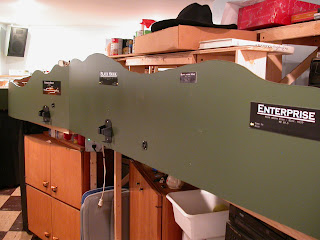 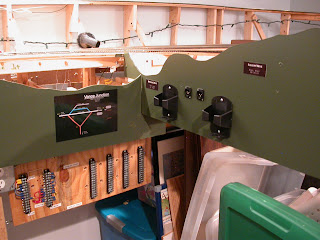 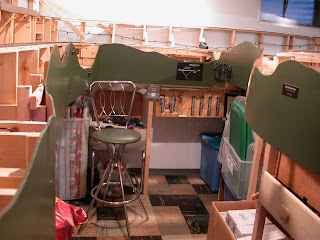 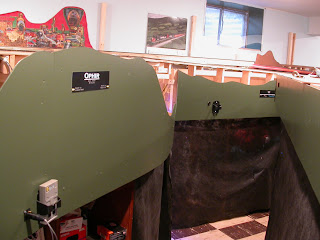 Here's a kinda poor picture of the current wiring for Durango. You can see the BD8 from The Signaling Solution installed here. This is one of a number of wiring panels, one per town. This is hinged at the top, and swings up and out of the way when I'm not working on it.

Each panel has bus feeds for track and other power (upper left corner), then feeds those circuits out to blocks and other circuits for that area of the layout. 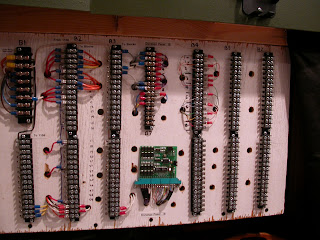 Well - time for a few photos. Here's some shots of the signs and control panel graphics I've added. I finally got one of my BD8 detector boards wired as well, and you can see a couple of the blue LEDs I'm using in the panels, for detection of trains on hidden track. 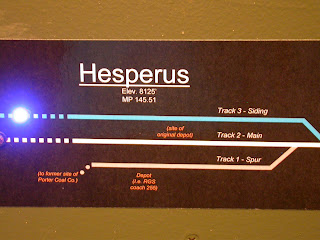 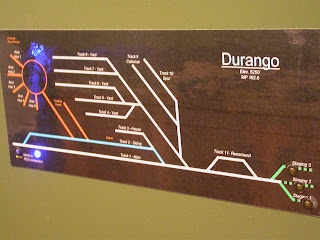 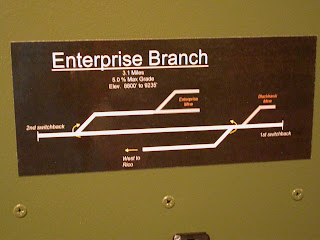 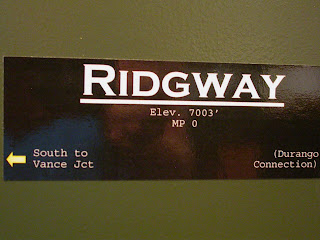