A friend and I wired the last Tortoise turnout motor (of the initial set of these, anyway), spent some time cleaning tools and whatnot from the tracks, and then started some simple operations.  The Ridgway and Telluride yards worked wonderfully, and we had a blast doing some switching and routing trains back and forth.  Although we mostly used only these two towns (and Rico a little), there was plenty of space, and it's encouraging that the layout can probably support a good number of operators easily, even now.

Next up, hopefully - completion of the Rico trackage, and the Enterprise branch, which should add significantly the operating possibilties.

I've started playing with David Hussman's car-card / waybill software, and eventually will start moving toward some more formalized operating schemes.  If you're looking for his software, btw, it's in the files section  Yahoo's Car Cards group.  It's great, and it's free, but does require Microsoft Excel and Access, on a Windows platform (since Access isn't available for the Mac at the moment).

I finally was able to finish all the wiring, LED indicators, and other stuff for the 6 Tortoise motors installed in the Ridgway yard area. This means the hidden and hard-to-reach turnouts for this yard are now all automated.

I will probably pull the springs from the Peco code-75 turnouts I've motorized, although so far I haven't actually removed any of the springs from these turnouts. The Tortoises (with .039" wire) are strong enough to overcome the springs, but I suppose it's silly to make the motors work harder; there seems to be no reason to leave the springs in place.

I finished up the mechanical portion of three more difficult Tortoise installs, under the yard lead at Ridgway. The fun part is that the control rods for these turnouts actually pass thru the edge of the hidden track below Ridgway, which is nearly directly under the yard lead.

Here's the innocent-looking yard lead from the top; the machines were installed on the three-way, and the next switch down (leading to the 3rd yard track). 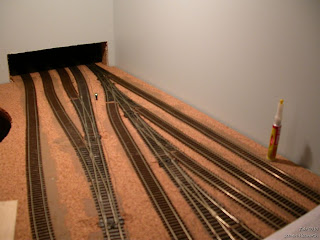 Here's an overall view from below; that benchwork is only about 12" deep here; very tight working conditions. 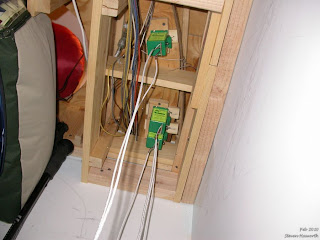 Here's the control rods and how they just miss the hidden track below the yard lead. I love small digital cameras; I can't see this otherwise. 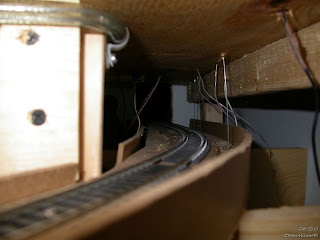 And here's a closeup of the machines for the 3-way turnout: 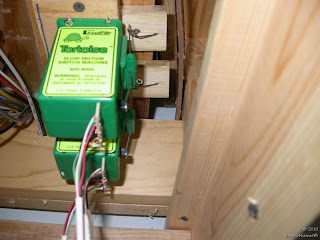 And a closeup of the machine for the track 3: 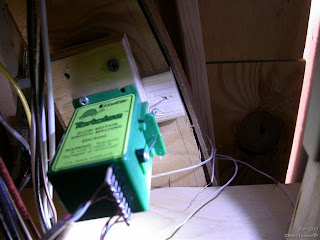