It's been a long time since updates, so I'll toss in a few items.  Spring(ish) since here in the Midwest we just finished up 5" of snow last weekend, in mid-April!  And now it's raining.  Like, almost every day.  Sigh...

Anyway, a number of updates to the layout  Over the holidays I added rubber floor tiles, which make working and standing a lot more comfy.  Extra bonus is the floor is warmer in the winter time. The tiles I purchased are these;
and I got a dark brown color.

A small tip - I found static electrictity a minor issue during the winter after putting the floor in; that was solved by advice from a friend... get some liquid fabric softener which has anti-static included, thin it down 2-1 with water, and just spray the floor.  Problem solved!

And, to make communication better I added a small phone system.  It took a bit of research, but - again with help and advice from other operators in this area - I found this PABX system, and added a few simple one-line phones.

This had made a huge different, primarily in helping operators coming into and leaving Ridgway, since Vance Junction (next town on the line) is on the opposite side of the basement with a couple small rooms in between.

Here's the control unit (wiring here isn't quite finished...). It just needs power (supplied with the unit), and then I ran a couple CAT5 lines from here to the various phones.  You could use any twisted-pair wiring; it's not critical since this is just basic audio signal (no high-speed networking or anything). 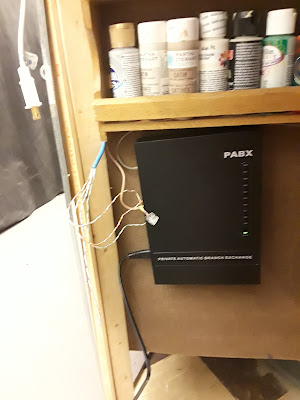 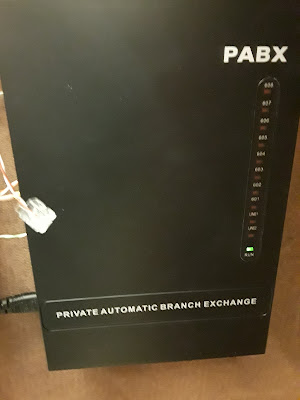 If you're looking for how to determine phone wiring, and the colors to use, here's a couple great pages that helped me:
There's some simple programming involved, which let me give each of my 5 phones a one-digit number, so calling between phones is really simple. I even ran a connection into the home landline phone, so I can either pick up or dial out using the regular phone as well (by adding a prefix).

Then it was time to actually install all the phones.  I located one in the laundry room, which might someday serve as a dispatcher desk.  Then, one at Ridgway, Vance Jct, Dolores and Durango. 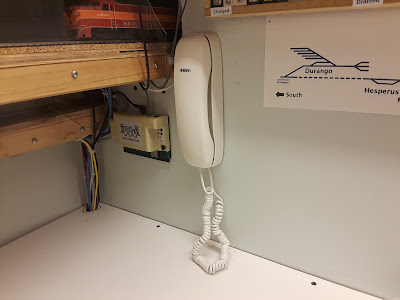 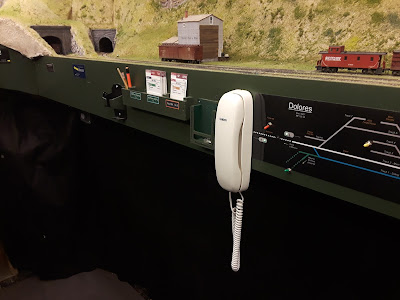 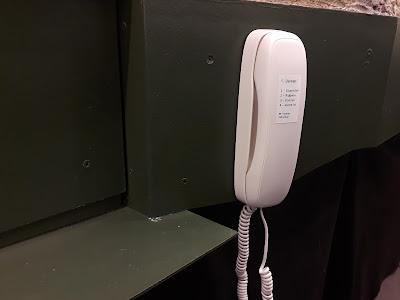 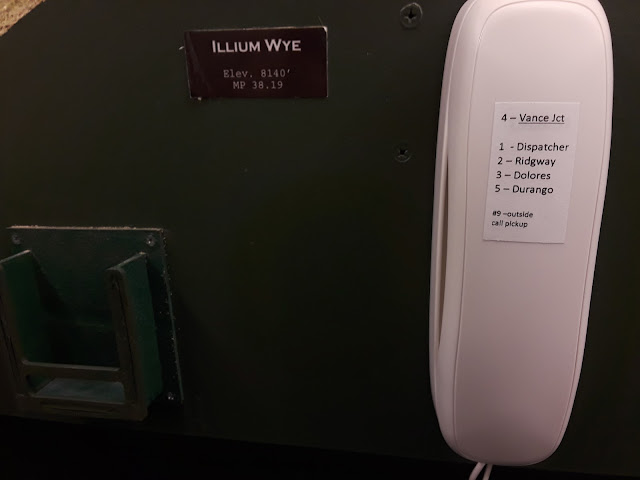 As you can see, I also labeled the phones with the other extension numbers, and how to pick up / dial out on the house phone if needed.  In the above photo, the label you're seeing was printed on sticky shipping labels, but they didn't adhere well.

After a little more research, I replaced them with some custom-printed vinyl labels, which worked great.  I had no idea it was so easy to have these created -pre-cut to the size I wanted, and printed with any text or image I liked.  I used this place for that; very low cost too!

Here are links to the phone system, and the phones -